Every week, I share an excerpt from my Great Aunt’s book, As the Story is Told: A History of Morpeth and Community, which was printed in 1986.

Researched and compiled by Keith McLean 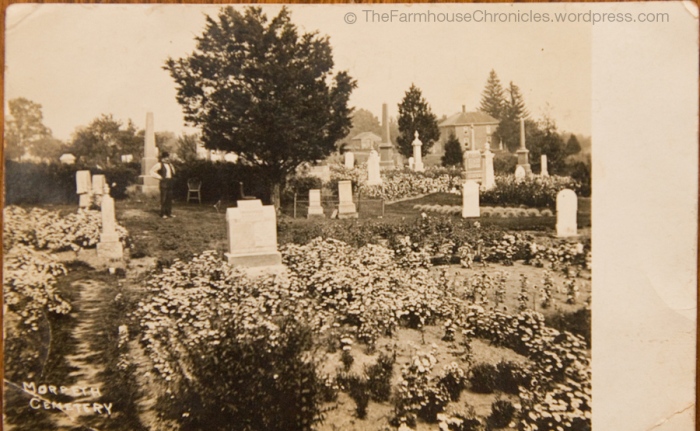 This brief history of our burial ground from pioneer days until the present time records the origin and the continuous community concern for this picturesque, secluded hill that holds the mortal remains of these our friends, neighbours and loved ones in their final peace. A first account will trigger corrections and refresh old memories of many an interesting story overlooked. Perhaps a few years down the path it can be revised and be accurate in every detail.

The condition of a cemetery reflects the character of its citizens and a well kept one is a credit to the community. Morpeth and district hold such a burial ground. Now let us travel back through the generations for a look at these records.
The narrative of the Morpeth Cemetery has its origins entwined with the history of the early pioneer families that settled on these lands under the watchful eye of Col. Talbot. The first settlers on what now embraces a start of our burial grounds were Israel Smith and his wife Elizabeth who located on Lot #90, North Talbot Road in 1818.

As in any life situation, even more in those days of death at an early age, a burial ground was soon needed. I assume that because of the high gravel ridge, separated from the tillable farm land by the gulley of Big Creek, this spot was chosen by the Smiths. The first fifty years are veiled in obscurity with no records in existence. These grounds were known in those days as the “Smith Grave Yard.” During this period Mr. And Mrs. Smith made available burial sites not only for their own family but also to the other pioneer families. Whether a charge was made or not lies in silence. A son Cyrus and his wife Catherine obtained the west half of this farm in 1853.
With acknowledgement and thanks to the Kent Genealogical Society for the research work done at the cemetery in 1978 we glean valuable information.

Research in the Kent County Registry Office yielded some interesting information. In 1868 Cyrus and Catherine Smith sold the “Smith Grave Yard” for the sum of ten dollars to a newly formed Trustee Board of the community. This deed is most interesting and now we have some written records. In part: “This indenture made this twenty fifth day of July in the year of our Lord, one thousand eight hundred and sixty eight between Cyrus S. Smith of the Township of Howard in the County of Kent of the Province of Ontario, yeoman of the first part, Catherine Smith of the same place wife of the said party of the first part, of the second part and Neil Campbell of the same place, William Coll junior and Robert Walters senior, both of the same place yeomen, Trustees of a Public Cemetery in the Village of Morpeth known as “Smith Grave Yard” appointed as hereinafter mentioned and described under the act, chapter sixty eight of the Consolidated Statutes of Upper Canada entitled An Act Respecting Conveyances to Trustees for Burial Places – of the third part.

Whereas at a public meeting held at the Village of Morpeth on the first day of May in the year of our Lord one thousand eight hundred and sixty eight by certain of the inhabitants of the Township of Howard in the County of Kent and the Province of Ontario which said meeting was attended by Neil Campbell, William Coll junior, Robert Walters senior, Robert Stirling, George H. Wood, William Reynolds, James Taylor, William K. Wood, Stephen Thatcher, and Walter B. Simmons and others and was called for the purpose of obtaining a conveyance of land for a burying ground for the inhabitants – not to belong exclusively to any particular denomination of Christians under the act above cited.”

These two preceding paragraphs are taken from the deed. It is a very lengthy document and all written in longhand. These men were very emphatic in stating more than once that this cemetery was to serve no particular denomination. The surveyed measurements are given in chains and links. Of this land Cyrus and Catherine retained their own family plot that was fenced measuring thirty four by twenty four and one half feet.

Another agreement made at this same time calls for the trustees to fence the entire pot. Although tattered by time this document is in our files and there is also a very faded photograph showing this board fence under construction. The quality of a print from this picture, at least one hundred and sixteen years old, was such as to be unusable.

It was interesting and obvious from the description given that this land was at least 500 feet north of the Talbot Road and there was no mention of a right of way. In 1872 the same trustees purchased these rights from John and Frances Mason, settlers on Lot #91, for the sum of two dollars. Surprisingly though the width is not mentioned. This location was necessary because of the impassible terrain of the Smith gully. This original document is among our records.

The most intriguing and unanswerable section of this history involves Mr. And Mrs. Mason. Hours of research uncovered a plan on a portion of the cemetery bordering the Smith Grave yard. On our cemetery maps this section is referred to as the “Creek Survey Block A” and sometimes as the “Mason Plot.”

In 1870 a land surveyor, Mr. Sherman Malcolm, was commissioned by John Mason to map out a burial plot on his farm with an access road from Talbot Street. This portion of land was somehow obtained by the trustees from Mr. Mason, unregistered and date unknown. Whether this was a gift or a purchase cannot be determined. However it is known that in 1878 John Mason fell on hard times. His wife Francis had left him and their four children and the farm was put up for a public auction selling to Matthew Wilson, a lawyer, for forty two dollars. This farm in the east half of Lot #91 is presently owned by Wm. Kowalec. This searching resulted in more questions than answers.

…To be continued next week…

2 thoughts on “As the Story is Told: Morpeth Cemetery, Part 1”