This is one of my favourite pieces from my genealogy collection – my grandfather’s composition book. I’ve shared this particular essay numerous times in the past, but this is the first time on this blog.

Near the end of the book I found something written in May 1932, so it must have been fall 1931 when he wrote this. Grandpa would have been 11 years old at this point, and his sister Helene was 15.

How I Spent Labour Day

On Monday morning I started to make a flower bed of my own. I had to dig sods and it was hard work. My mother wanted some elderberries and some ploughing done.

After dinner Helene and I went down to the barn and got the team. When we went to hitch the team on the plough we found there was no shear on it. Art went to the other place and got one. Mother wanted Dad to plough a furrow and then take the sod out. The Eberle boys came up and Bill had the wagon and I the wheelbarrow drawing sods. We took them down to the dam with the team and wagon.

After we got done we had a game of ball. The boat-races were that day so, we went down to Eberle’s to listen to them over the radio. After supper we went over to Middleton’s. 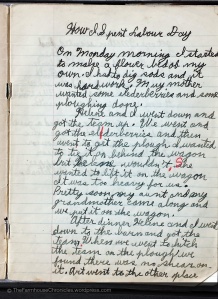 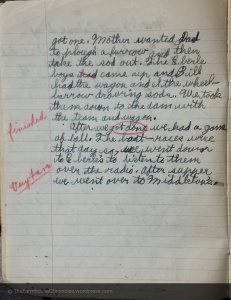