I enjoyed this week’s newsy letter from almost exactly 75 years ago. She includes some prices and reactions to her shopping that are interesting and telling, revealing some of the thoughts of a country girl in the city. Her postscript about the scarcity of granulated sugar is the closest reference I’ve heard so far that there was any impact of the war. 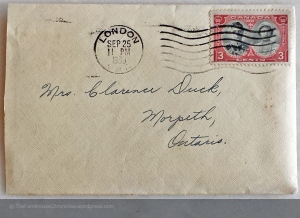 Dear Folks, –
Well, I’ve just paid my board, so I’ll eat for another week anyway. I pay in advance because it doesn’t really make any difference to me.

I was awfully glad to get your letter Saturday. I was looking for it and was glad to hear the news of the big city of Morpeth. You guys did a pretty big day’s work last Monday, what with canning, 12 men and then going out at night too. How did you do it? You didn’t say how you liked the Toll Brothers. There were here last Friday night but I didn’t go.

I was wondering if you would get to the dentist’s. Now you’ll have to screw your courage up again. I certainly was shocked to hear about Teed Smith. It must be an awful shock to them too. I knew that Alda was going to paper and paint last week. I saw his death in the paper Saturday after I got your letter.

Pat and Laurence haven’t gotten far since I left and I see that Mary and Larry Noble are going on just about the same. It’s terrible the predicaments that the Graham’s get in. The girls had better wear a label with their names on them.

I suppose the men will be in the corn cutting business now. It threatened rain all day yesterday and did rain a little by spells but didn’t amount to much.

I went to the show Thursday night – all by myself. It isn’t so bad though when you know where you’re going and how to get there and I’m used to travelling alone. Rose of Washington Square is not a bad show. They have so much drinking in the shows though that I don’t like them so well. The other picture was an aeroplane picture and I liked it very much. 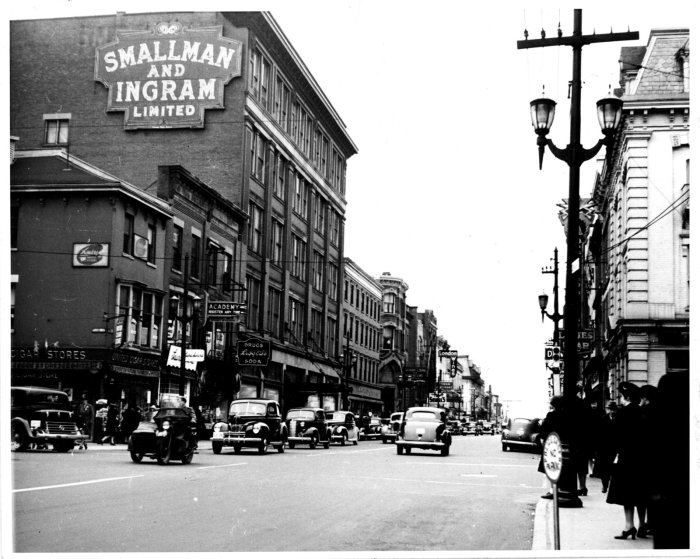 I didn’t get up until ten o’clock Saturday morning. Did a little work until noon and went downtown after dinner. Mr. Howard comes home at noon Saturday and we have our regular dinner at noon. Smallmen & Ingrams [see photo at left] were having their Anniversary Sale last week but I didn’t see anything I especially wanted. Saturday afternoon I bought myself a new purse at the Metropolitan Stores. I have been looking at the purses – you know I don’t like the ones with all the handles, etc. And a lot of them seem to be either very large or very small. It is a fold-over one and believe it or not but it’s brown, has 2 zippers and a purse for your money (if you have any). It is the only one of the kind that I like that I’ve seen and I thought that brown matched my clothes very well even if I don’t like it – so I bought it.

After that I went to a show – saw Robert Taylor and Hedy Lamarr in “Lady of the Tropics” – it is not what I would call a good show. I don’t like Robert Taylor anyway – the other picture was “Miracles for Sale” – about a man who invented magicians’ tricks. It filled in the afternoon and that’s about
all I’d say about it.

The shows in this town haven’t been much so far. I got home Saturday night at six o’clock and they had just started to eat supper. The bus service here is bad – I had to walk 15 minutes for a bus.

Mrs. Howard wanted me to go downtown wither her Saturday night and so I did. I saw the market. You should have been here. They had lots of the green plums like you wanted for .30¢ – .35¢ an 11 quart basket. They also had lots of beautiful cauliflowers for .10¢ & .5¢ besides every known kind of vegetable almost. Cucumbers are very very scarce and expensive. They didn’t have any nice ones at all. You know how they look in dry weather. There are practically none to be had here now. Mrs. Howard bought a 6 quart basket of peaches and I carried that home for her. She took me into an ice cream parlour and treated me to a soda too. I think that by what I hear I’m very lucky. I have the freedom of the whole house here and some of the other boarding houses are pretty strict.

Sunday morning I got up thinking they would be going to church but they didn’t go so I didn’t go alone either. I sat around here all day yesterday and did nothing. What did you do? We went to church last night – to Wesley United. It is on Askin Ave. And a good 15 minutes walk from here. They have a large church and a nice pipe organ. The organist is a young man of 27, and he has a fairly large choir. Their music was very nice.

Our work is still rather slow in some things. We haven’t had much homework yet. By the way if some of those cartoons or whatever you call them are on the front page of the second section of the Star, are good, I wish you would cut them out and keep them. Has my little Ike been working hard? Am enclosing a clipping of the wedding for you Ike. How is my Sparky dog? How are you managing with cats Ike? Do you still get mad at them?

I haven’t seen much of the girl 4 doors from me, Eileen King from Woodstock until to-day. She is in a different form and has a different locker room from me and so that makes it hard. We walked home together at noon to-day and back to school together and to-night after 4 we had our first class in religion. I met her after that and we went for a half hour walk before we came home. We have decided to try to get together when we want to go to a show etc. She seems very nice.

I have written to Ethel but have not heard from her yet so do not know whether she is coming home Saturday and is going to stop here to see me or not.

I guess this is about all I know for now and so will close and take a little walk in the night air & post it so that you will get it to-morrow.
Love Helene
If you can buy granulated sugar there I could buy some because it is very scarce here.

One thought on “September 25, 1939 letter home from London Normal School”