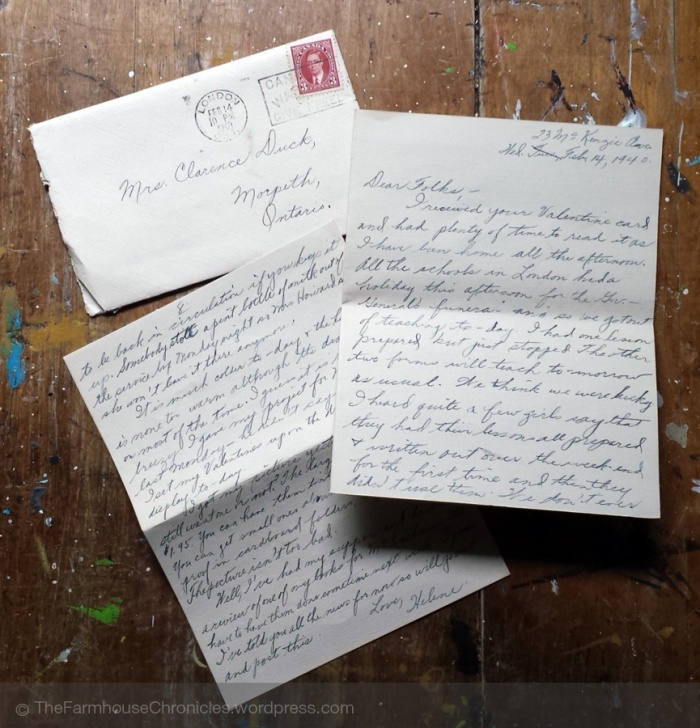 Dear Folks, –
I received your Valentine card and had plenty of time to read it as I have been home all the afternoon. All the schools in London had a holiday this afternoon for the Gov. General’s funeral and so we got out of teaching to-day. I had one lesson prepared but just stopped. The other two forms will teach to-morrow as usual. We think we were lucky. I heard quite a few girls say that they had their lessons all prepared & written out over the week-end for the first time and then they didn’t use them. We don’t ever expect to have to teach it. I was at Mr. Rigney’s in the country with a lot of seat work to prepare so I’m not doing any weeping about it.

Yesterday I looked for a letter from you at noon. There wasn’t anything on the dining-room table so I was rather disappointed for a minute but on the parlour table were four letters for me, Valentines from Mrs. Rockey, Mrs. Clark & Bertha, a letter from Ethel & yours. To-day I got a Valentine from Murray M. & a short letter from Anne. So this has been my lucky week. Just because I tell you this, don’t stop writing because last week yours was the only one I got. I seem to get a lot at once or else none.

Well last Saturday morning I went over and hacked away at some stubborn wood again. It seems to be a slow process.

I wanted to got to the library Saturday afternoon and Ilene King wanted to go too so we went together. Afterwards we went to see Kay Kyser in “That’s Right – You’re Wrong” first show I’ve been to in two weeks. It was very good and very funny. Kay certainly isn’t much for looks.

I did hear that hockey game Saturday night. Wasn’t it a honey. Boy oh boy how I would like to have been there! But no such luck.

I didn’t get up until 10:30 Sunday and didn’t get dressed until 5 o’clock. I spent all day up in my room putting the finishing touches to my project on Kent County and doing some art and other things. I had a bath and got dressed in time for supper. A young couple (the nurse whom they had last winter – they were married last spring I think) happened along and were here for supper too.

I called Marjorie up just before supper but she didn’t know anymore than I did. She is going home this week-end. I went to church all by my lonesome. Marjorie said that she would have gone with me but she was drawing a map of Essex County. The Sunday School Orchestra was giving a recital from 6:30 – 7. There were about 16 in it and they were very good. The Junior Choir was there also and the combined choirs gave two anthems and three young girls sang a trio. It was a very nice service. Two other Normal students came in and sat with me so it wasn’t so bad. There was a double feature over here at the Elmwood Monday night that Marjorie wanted to see and she coaxed me to go with her. The walking was rather bad. It was rather wet, slushy and slippery too. I was rather dubious about “The Housekeeper’s Daughter” with Adolphe Menjou and Joan Bennett but it was very good and quite funny too. The other feature was the Ritz Brothers in “The Gorilla.” It was funny. The Ritz bros are so dumb that they are funny. I was glad I went. We were home by 10:30. I’m glad you went to see “First Love.” You want to hook onto those guy’s coat tails every chance you get. I think we get more for our money though. Ethel said that she saw “Gone with the Wind” and it is very good.

Mrs. Howard seems to be all better. They are having a couple in for supper to-night. We’re having rabbit. He was hunting again Saturday. They just phone to say that they would be late.

They told some of us yesterday where we are to teach for the week after Easter. I am to teach at S. S. No. 1 Howard, Trinity for Aileen Chambers. I went to High School with her and it will seem rather strange. It is closer home anyway. Mary Demaree has Green’s and David Hall has Northwood.

My table here was piled high with stuff that there wasn’t any room to work so I sort of housecleaned it this afternoon. I was talking to Mrs. Elgie again last night. I expect to go this Saturday and I guess Verna is going too. Whether I’ll go with her or not I don’t know.

Next week I go back to Simcoe again, Grade I, Miss Lancaster. I was there before.

So you read my letter after the Missionary meeting eh! I don’t remember what was so funny in it.

Saturday afternoon Ilene and I went downtown with Mr. and Mrs. Jull (the people where she boards) and he took us right to the Library so it wasn’t so bad.

You did pretty well last week. You go in spurts – a Missionary meeting, World’s Day of Prayer, a show & S.S. & church. You’re going to be back in circulation if you keep it up. Somebody stole a pint bottle of milk out of the service box Monday night so Mrs. Howard says she won’t leave it there anymore.

It is much colder to-day & the house is none too warm although the drafts are on most of the time. I guess it is rather breezy. I gave my project for McEachran last Monday – he didn’t say much. I set my Valentines up on the dresser on display to-day.

I got my picture yesterday. Do you till want one or not? The large framed ones are $1.95. You can have them tinted if you wish. You can get small ones about the size of the proof in cardboard folders, 3 for $1.50. The picture isn’t too bad.

Well, I’ve had my supper and have written a review of one of my books for McEachran. I’ll have to have them done sometime next week. I guess I’ve told you all the news for now so will go out and post this.

One thought on “Letters from Normal School: A lonely Valentine’s Day in 1940”