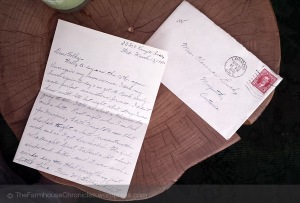 Dear Folks, —
Well, to-day was the 13th again. Once again my lesson is over. I took my lunch again to-day and so got to Beck early – made perfect connections for once. I didn’t know until late last night what story I was going to tell. I told one about a Chinese boy and a kite. Last night when I called for Marjorie, Edith King told me that she had taught a kite for construction work and so I got her model. The girl who taught first talked a lot about winds and kites and it was such a windy day too that everything just fitted fine. Miss McWilliam didn’t say much about my story & kite. She said they were both alright but I don’t know how many marks she would give me. However that’s past now and I have worse things facing me. I have to study for a test in Sc. Of Education on Friday & that means plenty of work & a test on Monday and one on Tuesday. I need that sample of serge by the end of the week too.

I stayed up until after 2 Sun. night and up again Monday morning. It was another dumb test if you ask me & another flop as far as I am concerned. We marked our own papers for Primary Reading so I know what I got. It was marked very liberally. (Please don’t broadcast this abroad. I got 80 marks. It might be deceiving because I am having a terrible time in other subjects).

We had our P. C. examination yesterday. I didn’t do that the way I intended to – it seems as if you never do. Two officers were there one of them was the little fellow who used to come up to Ridgetown to train us before cadet inspections.

Last night Marjorie and I went to the Seed Fair. It was much the same as the Corn Show in Chatham last year. We were home about 9 but even so it took me till the small hours of the morning to pick out & learn my story.

It started to rain this afternoon and to-night everything is all ice. Uptown it wasn’t quite so bad but McKenzie Ave. here is terrible.

You know it was no wonder we thought it was so cool here Sun night. I see by the paper it was just zero and Mon night it was 4 below zero. It certainly felt as if winter had returned.

I wondered when I didn’t get a letter from you to-day, if you had gone to the dentist’s but it was pretty cold weather for it.

Mrs. Howard is just putting in a call to Chicago. She has never heard from her brother.

I can’t seem to think of any more news now so will skate or slide down to the mail box with this.