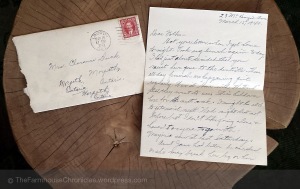 Dear Folks, —
Got your letter when I got home tonight. Took my lunch again to-day. I had just about decided that you must have gone to the dentist’s. These all day funerals are happening quite regularly. Was it “Gone with the Wind” that they went to see. It is held over here for next week. I might be able to go to see it next Wed night but not before but I don’t like going alone and haven’t anyone to go with. Marjorie saw it last Saturday.

Aunt Jane had better be careful or she may break her leg or her neck yet. That was quite an ice storm wasn’t it! I don’t know when the walking was so treacherous as it was Wednesday night when I went out to mail that letter. Some of the sidewalks were bumpy and it was almost impossible to stand up. I said I should have worn my skates. There was a girl skating away on the sidewalk over by the mail box and having a great time. It didn’t start to sleet here until about 2 in the afternoon. That storm came from the west. It snowed 2 inches here that night and has snowed off and on since, so we have plenty of snow again.

Saturday night I wondered about the hockey tickets but I didn’t ask him about them then and Sunday I forgot about it. I couldn’t figure out any time when he might have paid her. That is really awful. She would think that we are nice people. I certainly will write to her.

How can Babe ever stand to be away from home so long! I can’t understand that!

I was up until 2:30 this morning studying and then the test was so simple that I didn’t know and do the right thing. I am nearly dead to-night but I think I’ll go to a show and relax. It takes your mind off your problems. I hope to get to bed early to-night. I wish you people would decide and let me know by Tuesday or Wednesday whether you are coming after me or not. I don’t intend to bring quite so much stuff home this time. I might be able to get it in the 2 suitcases, I don’t know. I wish you would let me know what you think. By the looks of things now we won’t be out until 4 o’clock on Thursday. If you decide to come, I can let you know about the time when I write Wednesday night. I have 3 lessons to prepare for Wednesday, a speech and reading test on Monday, music on Tuesday, P. C. on Wednesday, manual training to-morrow morning & art & numerous other things – and I want to get some sleep too. Got to go now as I want to get home early. Write.