I wanted to note some of my own memories of the Morpeth Hall. I remember when the hall burned down in 1983. I was not quite six years old at the time. I remember going to “Playground,” which was like day camp, probably that same summer. I remember learning the song, “In the Land of Mars, where the ladies smoke cigars…” I was a very shy child so I remember crying and wanting to go home! I remember after the fire, we got some small juice glasses that had been salvaged.

Regarding the new existing hall, we attended and hosted several notable events there: I remember going to a dinner dressed up in pioneer costumes; attending craft fairs; hosting my parents’ 25th anniversary there; and celebrating a second wedding reception for our wedding in 2000.

Erection of the Morpeth Community Centre

After the Morpeth Hall was destroyed in an early morning fire on September the 24th, 1983 there was great concern in Morpeth over the rebuilding of their community meeting place. Early in November of 1983, a meeting was held when everyone seemed determined that Morpeth’s hall should be rebuilt. This was followed by many months of planning, during which many things had to be considered: what would the community like, people capacity, energy efficiency concerns, handicap facilities, affordability, plans, etc. By Feb. 1, 1984 the hall was well into the planning stage with plans in the engineer’s hands for working out the final details.

The building was designed by McGeorge and Barry, Consulting Engineers of Chatham. According to plans the new centre would hold 200 people and include a hall 75 by 40 feet with kitchen facilities, bar area, coat room, a large meeting room, storage and utility room and men’s and ladies’ washrooms. The estimated cost was $250,000.

Financing was the greatest concern in providing this new facility for the community. A public drive for funds was made and it was quite evident from the donations made by the people of Morpeth and the surrounding area, that they definitely wanted a community centre. 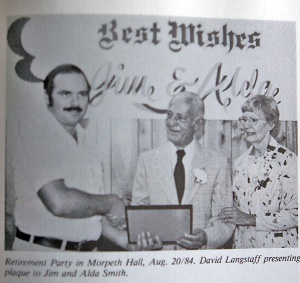 On July 28, 1984 a very successful chicken barbecue was held to assist in the fund raising. That day the weather co-operated, the number of people who attended surpassed everyone’s expectations and the food was excellent. Approximately $3000 was added to the growing fund. In August an auction sale of various articles, baking, vegetables, etc. collected from the community further increased the amount on hand. The biggest boost financially came when the Canada Works Grant was confirmed. The $89,308 was to help with wages, material etc. And was to provide work for thirteen young people between the ages of sixteen and twenty-four.

Wednesday, June 12, 1985 was a red letter day; the sod was turned to start the building of the Morpeth Community Centre. The contract for the construction of the hall had been granted to John Faas Construction Ltd. of Ridgetown. A well on the property had already been drilled by Glen Galbraith, during the summer of 1984. Additional property, to allow plenty of space for parking, was purchased from Sherwood Ashton.

The second annual chicken barbecue, held July 27, 1985 was another success. The proceeds this time were divided between the Community Centre and the James R. Smith Playground. Groups, organizations and individuals outside of Morpeth have been most generous with their donations and have helped greatly to make “our dream” become a reality.